Bring me Solo and all the free time you have for the next three weeks. And a diet coke. (Photo credit: Wikipedia)

As mentioned, I spent most of the last week or so working on short stories. Right now I’ve got a big ol’ ball of ideas that I need to sort. I think of it like a ball of yarn made up of different pieces of other, lesser, yarns, all knotted together into one immense piece of string. And there’s floor dirt caught up in there, and cat hair, and pieces of paper, and chewed-on bones.* From that, I have to unwind just enough to make a story.

The problem, of course, is that the ball of yarn wants to unravel. Ideas keep growing. One of them looks at another, and then before you know it, I’ve got a whole slew of other ideas. Or the first one just ate a bunch of smaller ones, so it’s now a huge, lumpy, Jabba the Hut idea.

My metaphors are all over the place. This is what happens when I’m working in Idea Brain.

Short stories are tricky territory. You need a good idea, but it has to be the right size. Under 5,000 words is a good general rule. And some stories just want to keep growing. They want to stretch. They want to eat the radioactive ooze and come ashore as giant, stomping novels, laying waste to all before them.

Which is great. Except when you’re trying to meet the submission guidelines for an anthology.

I have a solution: planning. Not just planning the story, but all the other shit that’s going on in the background. Because the problem is really that, in order to write a good story, you have to have good characters. And those characters should have some kind of life that preceded the story.** So they push the boundaries and the word count because they’re trying to become real.

Let ‘em. It’ll add to your final story, and you can keep it under the word count.

Here’s an example. This is the planning I’ve been doing for the short story that’s first on the list. You can click to make it bigger, if for some reason you want an in-depth look into my head. 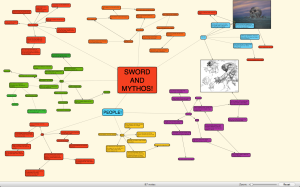 Behold the awesome majesty that is my brain at work.

No, I did not colour-code everything just for you. I’m that anal-retentive on my own.

The only part of that map that’s the actual story is the little cluster of red ones in the top left corner. Yup. That’s it. Everything else is background, world building, character back stories, mythology…stuff that will only make it into the final project as whispers and shadows.

This is how I keep ideas manageable. And never think of all this shit as wasted work. One, it adds to the finished story in ways you can’t imagine. It makes it feel like a window into a world instead of a recursive loop of self-contained plot. And two, if you ever want to revisit the characters or the world, like in the old Sword and Sorcery stories, they’re right there waiting for you.

So let ’em become real. It’ll pay back in terms of realism. And, let us not fucking forget, it’s fun as hell.

(Update: in spite of my comment here, I did get an official rejection letter from Harper Collins Voyager this week. It came after the deadline, but I still appreciate the effort. So now they’re officially on the board. Score for this year is 0-1. Bring it on.)

*Not sure who did the chewing. Maybe one of the cats. Maybe me.
**Whether or not they had a life that extends past the story really depends on how the plot goes. My characters have about a 50-50 shot.

3 thoughts on “Biting Off Ideas: The Short Story”