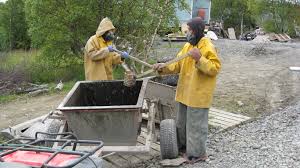 No one ever promised you ‘easy’.

It’s a myth that writing always feels good. Sometimes it’s hard, for a variety of reasons. The most obvious of these is of course not knowing what to write next, or not knowing how. But I’m here today to address the lesser-known but still powerful type of hard: emotionally difficult.

Case in point: the other day I was working on a scene that honestly made me uncomfortable. It was about a rapist justifying his own actions to himself. The whole thing left me feeling like I’d just taken a running leap into an open sewage pit.

I didn’t want to write it. I don’t even know if that particular scene will make it into the final cut. But I needed to know how he would see it, because of course very few people ever see themselves as the Bad Guy*, so that I knew how he would act later. Because how he acts later is instrumental to how the main character sees him, and makes a decision regarding him. There are serious consequences to his action, and I needed to know how he would accept—or, in this case, not accept—these consequences.

Still, that was a hard 1,000 words. It took me damn near all afternoon, when normally I’d crank out that many words in an hour and then get a cookie. I wanted to stop, not because the words weren’t coming, but because when they were I didn’t want them to. I spent half the afternoon writing a couple of sentences, getting weirded out, and walking away for ten minutes or so before coming back. Because, distasteful as I found it, it needed to be written.

So I wrote it, and felt dirty all over when I was done.

But yesterday I opened it up again and read it over, and it turns out that scene is exactly what it needs to be. Anyone else reading it will come away feeling the same way I did. Which, considering what we’re discussing, is the idea.

This comes back to that old Stephen King quotation that I bandy about every now and then:

“[S]topping a piece of work just because it’s hard, either emotionally or imaginatively, is a bad idea. Sometimes you have to go on when you don’t feel like it, and sometimes you’re doing good work when it feels like all you’re managing is to shovel shit from a sitting position.”

You can’t leave the hard stuff out and write only the pieces you want. Because there’s gold in them there hills, if you’ve got the guts to make the climb and dig it out. It won’t be nice, and it won’t be easy. But whoever said art has to be either was a fucking liar.

*Though he is. No worries about that.

4 thoughts on “Breaking Out The Hard Stuff: Writing The Parts You Really Don’t Want To”