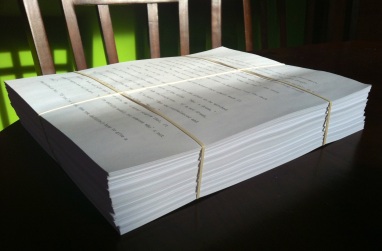 Not Pictured: That Manuscript. This is a completely different one.

I wrote a scene for a book ten years ago.

Shit. Writing that sentence was the first time I stopped to do that particular math. Fuck. That was longer ago than I thought.

Anyway, this was my first finished book. It sucked. I mean, it’s not spectacularly bad– it doesn’t physically hurt me to read it, like some of my earlier, unfinished stories–but it still sucks. It will remain in cold storage indefinitely, or until the sun explodes and burns us all to a crisp.

But there was this one scene. I liked it. I still like it. Not the way it was written, because, dude, I was just starting out then. I had spent the previous six years writing academic papers. My fiction writing was not great, to say the least. I could over-explain like a boss, though.

But I liked the idea behind this scene. It’s one of the only parts I remember really clearly from that first book, so it stuck with me, even after the rest has been mercifully flushed down the memory hole.

And over the weekend, I was doing the brain work on another story and I realized something.

I had written that scene for the wrong book.

The one it belonged in was the one I was working on now.

So what’s the moral of this tale? Well, it’s not never throw anything away, because some of the stuff you produce will be complete garbage and you should absolutely throw garbage away.

But some things don’t stay on the compost heap. They claw their way back. And those…those you should give a second look. Because it might be a case of right place, wrong time. Write place, wrong time, maybe, if I’m allowed a moment to be completely insufferable.

Old scenes, old characters, old plots can be reused, especially if you originally created them for something that never quite came together. Break it down for spares and use the parts that work.

And let the rest stay on the fail heap. For now.