Goddamn it, Jacob, stop hugging me so I can go unleash a plague or some shit.

1. The Earth Angel. So fucking perfect all the fucking time, until you just want to smash their imaginary face in. This character is sometimes known as the Mary Sue, but that’s fucking sexist and also ignores the term’s origins in fan fiction. So I’m going with Earth Angel, because this character, whether male, female, another gender, or entirely genderless, is so goddamn perfect that they stop the story dead in its tracks. Nothing ever happens that they can’t fix perfectly, with no consequences or fucking it up or accidental deaths or anything. Snore.

2. The Psychopath. Dead, emotionless, usually bad-ass, and completely in control. I don’t know how this became a thing—though I’m looking hard in your direction, American Psycho—but it is creepy as hell. If your protagonist relentlessly mows down others in order to get their own way, then I’m probably rooting for the villain.

This doesn’t mean characters can’t be selfish. Selfishness is part of being human, and a healthy amount of self-interest drives characters to make interestingly poor choices. But a dead-eyed hustler who uses other people as a means to an end and then discards them without a second thought? Someone put a scorpion in their Armani jacket, will you?

3. The Lump. Need a character who does something? Look elsewhere. This often-found problematic protagonist never actually does anything. Instead, they’re relentlessly shoved around the story by other characters, like a leaf on storm-force winds. They might as well be a camera lens for the reader to see the story, an dispassionate observer of the events. The good news is their dead weight will be enough to drag the Sack of Crappy Protagonists into the briny depths.

4. The Emo Sad-Bag. We get it. You’re fucked up. You hurt. But, for the love of Christ’s most holy butthole, do you have to keep talking about it? Or thinking about it? Or generally sitting around like a mopey sack of crap, looking in mirrors and sighing wistfully?

Into the sack. Try not to drown in your own bravely-held-back tears before we get to the shore.

5. The Idiot. I cannot deal with stupid protagonists. Short-sighted is fine; bright but not as smart as they think they are is even better. But genuinely stupid, to the point of making bad choices for no goddamn reason at all other than the author needed a way to move the plot along? Get in the sa—actually. You don’t go in the sack. The lazy author who created you goes in the sack.

What about you? What protagonists can you not abide?

*As always, your mileage may vary. Someone out there must love psychopath characters, or they wouldn’t keep getting written. 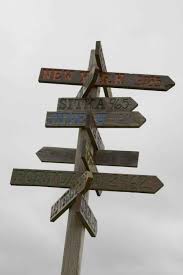 That way goes home…but this way goes to a questionable life choice? Sign me up!

The world—and in this context, by ‘world’, I mean the part of it that gives writing advice—is full of articles discussing character motivations and choices. Why does your character do this and not that? Why did they press that button? Why did they fuck that guy? Why, why, why?

It’s a good question. As questions go, it’s one of my personal favourites.* But here’s my tweak: the reason your character has for doing stuff…it doesn’t have to be a good one. In fact, a lot of the time, it’s better if it’s not a good one. And by ‘good’, I mean ‘the best possible choice in the circumstances.’

Why? I’m glad you asked.

Nothing is more boring that perfection.** And boring characters kill stories like the cold, heartless assassins they are. So fuck the main character who makes good choices. We want to see them make bad decisions. Not bad as in stupid; I fucking hate it when a character makes an illogical, pointless choice for no reason other than the plot demands that it be made. But making decisions based on faulty logic? On emotional turmoil? Or, my personal favourite, making a choice because some less-than-attractive aspect of their personality demands it? Oh yes. That’s the good stuff.

We want to see their pettiness, their insecurities, their damage. Because that’s how we know that they’re just like us.

If you try and tell me that every decision you’ve ever made has been the result of careful consideration and logic, you’re either a liar or an android sent to spy on us by an alien civilization. Also, I hate you. And you’re probably boring.

No one wants to read The Adventures of Someone Who Thought Very Carefully About Everything, because that person probably doesn’t have adventures. Or, if they do, they’re the result of outside forces impinging on that person’s meticulously ordered world, which is less interesting than someone who goes out and does stuff on their own. Even if it’s bad stuff. Especially if it’s bad stuff.

I want to see your characters fuck their ex even though they know, deep down, that it’s a bad idea. But they’re having a rough day and there are meticulously boring assassins everywhere and they don’t know who to trust. And, sure, maybe the ex is a deadbeat with daddy issues and a killer robot sidekick, but damn it, they’re cute. And they still have that smile. And it’s been a really, really, really hard day. ***

Show us that: the moment of weakness, the lapse in logic, the choices that are made for all the reasons that we shouldn’t make choices. But we do. Every damn day. And sometimes they work out and sometimes they don’t. It’s the same for characters. Just keep them away from perfection.

*Along with “I wonder what happens when I do this?”
**Anyone seen the Lego Movie? There’s a reason the Kragle was the tool of ultimate evil.
***I kind of want to write this now.