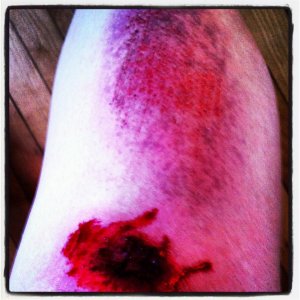 It’s probably not healthy that one of my first thoughts was, “Hey, this would make a good blog post! I need a picture of this!”

See that bloody wound over there? I got that from story.

Before you picture one of my over-taxed protagonists finally having enough and taking my kneecaps in retribution for all the shit I put them through, allow me to clarify. I was out for a run yesterday with The Husband and Krys. (Yay for keeping up on 5K training!) It was my turn to lead our little pack, so we went off on a loop through the neighbourhood. I may have made them chase me around a few lampposts, but that’s not important.*

We were on the home stretch, almost finished. It was a beautiful evening, too: sunny for the first time in days. I was feeling good, riding the high, and then BAM. Tripped on a perfectly flat sidewalk. Wasn’t even any loose gravel or sand that I could blame. No conveniently placed wet leaves. Just me and gravity, that heartless bitch.

And how did I manage to trip on a perfectly flat sidewalk, you ask? Simple. I got distracted by story.

Yeah. I flayed the skin off my leg because of a story idea. It wasn’t even one of those big new ideas like I mentioned before. This was just a little tweak, a scene that needed to be written to expand a character I was having trouble with. But it was a good idea, so I thought about it a little more while I rounded the turn up the hill. I let it play out in my head, watching the characters interact, listening to them argue. I got some snippets of dialogue. I felt something worthwhile there—

—And then I felt the sidewalk. Luckily, I know how to fall, so I only fucked up one leg. And my elbow. It looks worse than it really is, especially today. Picture less messy but more gross.***

After that I picked up myself and my scuffed pride and finished the run. Admittedly, a little slower than I started. But I like to think the neighbourhood kids will remember me running down the street with blood coating my leg the next time they decide to light firecrackers in someone’s yard. For best effect, I should have been carrying a weapon of some kind, but, alas, I was unable to plan ahead.

When this mess heals, I think I’m going to look on the scar that’s left as a tribute to the power of creativity: Behold! I am Imagination! Creator of worlds! Enricher of lives! Slayer of knees! I have the power to lift you up, and the power to knock you down (with the help of a sidewalk). Look upon my works, ye Mighty, and fetch the Bactine!

Now I need to go write the scene. Because, hey, I fucking paid for that one. In blood.

*It was fun, though.

**It’s true. If I was an Avenger, I’d be the Hulk: everything’s going fine, we’re being clever, and then BAM SMASH THUMP RAAAAARGH. And then a building falls down.

***If the technical medical terminology is too much, let me know.